If your not familiar with NDT you are in for a revelation, the general information below is intended to provide a some basic description of NDT and the most common test methods and techniques used when performing NDT.  As such it is not highly detailed or all encompassing, and for more comprehensive information readers should refer to technical specification and standards, Personnel Training Publications (PTP) Classroom Training Series, all of which are available from ArabianConsult.com.  Also, standards covering these test methods are listed on the “Codes and Standards Bodies” page under the NDT Resources Center tab.  To maintain consistency, the techniques described for each test method are those listed in the 2011 edition of ASNT’s Recommended Practice No. SNT-TC-1A.

What Is Nondestructive Testing?

Nondestructive testing (NDT) is the process of inspecting, testing, or evaluating materials, components or assemblies for discontinuities, or differences in characteristics without destroying the serviceability of the part or system. In other words, when the inspection or test is completed the part can still be under use.

In contrast to NDT, other tests are destructive in nature and are therefore done on a limited number of samples (“lot sampling”), rather than on the materials, components or assemblies actually being put into service.

These destructive tests are often used to determine the physical properties of materials such as impact resistance, ductility, yield and ultimate tensile strength, fracture toughness and fatigue strength, but discontinuities and differences in material characteristics are more effectively found by NDT.

Today modern nondestructive tests are used in manufacturing, fabrication and in-service inspections to ensure product integrity and reliability, to control manufacturing processes, lower production costs and to maintain a uniform quality level. During construction, NDT is used to ensure the quality of materials and joining processes during the fabrication and erection phases, and in-service NDT inspections are used to ensure that the products in use continue to have the integrity necessary to ensure their usefulness and the safety of the public.

It should be noted that while the medical field uses many of the same processes, the term “nondestructive testing” is generally not used to describe medical applications.

As described above, most of the methods prescribed utilize non invasive penetrating medium to adequately scan the physical properties of material. Penetration medium such as magnetism, sound frequencies, energy frequencies, and or visual inspection. Overall specialists are usually concerned when utilizing NDT if whether the stock material utilized has endured substantial stress levels to propagate micro fractures or even cracks. the overall mechanism on how such method is used is to identify on whether there is abnormalities and size of such abnormalities to better determine components status.

Magnetic Particle Testing uses one or more magnetic fields to locate surface and near-surface discontinuities in ferromagnetic materials.  The magnetic field can be applied with a permanent magnet or an electromagnet.  When using an electromagnet, the field is present only when the current is being applied.  When the magnetic field encounters a discontinuity transverse to the direction of the magnetic field, the flux lines produce a magnetic flux leakage field of their own as shown in Figure 1.  Because magnetic flux lines don’t travel well in air, when very fine colored ferromagnetic particles (“magnetic particles”) are applied to the surface of the part the particles will be drawn into the discontinuity, reducing the air gap and producing a visible indication on the surface of the part.  The magnetic particles may be a dry powder or suspended in a liquid solution, and they may be colored with a visible dye or a fluorescent dye that fluoresces under an ultraviolet (“black”) light. 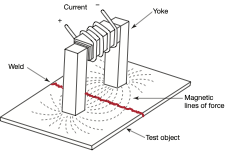 Most field inspections are performed using a Yoke, as shown at the right.  As shown in Figure 2(a), an electric coil is wrapped around a central core, and when the current is applied, a magnetic field is generated that extends from the core down through the articulated legs into the part.  This is known as longitudinal magnetization because the magnetic flux lines run from one leg to the other.

When the legs are placed on a ferromagnetic part and the yoke is energized, a magnetic field is introduced into the part as shown in (b).  Because the flux lines do run from one leg to the other, discontinuities oriented perpendicular to a line drawn between the legs can be found.  To ensure no indications are missed, the yoke is used once in the position shown then used again with the yoke turned 90o so no indications are missed.  Because all of the electric current is contained in the yoke and only the magnetic field penetrates the part, this type of application is known as indirect induction. 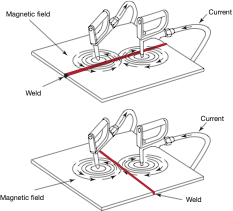 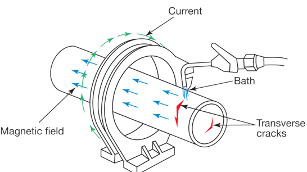 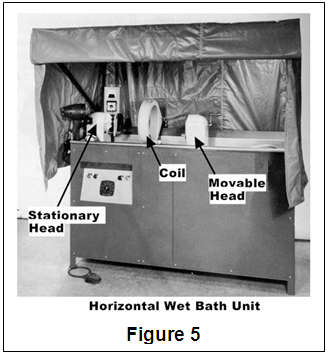 Most horizontal wet bath machines (“bench units”) have both a coil and a set of heads through which electric current can be passed, generating a magnetic field.  Most use fluorescent magnetic particles in a liquid solution, hence the name “wet bath.”   A typical bench unit is shown at the right.  When testing a part between the heads, the part is placed between the heads, the moveable head is moved up so that the part being tested is held tightly between the heads, the part is wetted down with the bath solution containing the magnetic particles and the current is applied while the particle are flowing over the part.  Since the current flow is from head to head and the magnetic field is oriented 90o to the current, indications oriented parallel to a line between the heads will be visible.  This type of inspection is commonly called a “head shot.”

When testing hollow parts such as pipes, tubes and fittings, a conductive circular bar can be placed between the heads with the part suspended on the bar (the “central conductor”) as shown in Figure 6.  The part is then wetted down with the bath solution and the current is applied, travelling through the central conductor rather than through the part.  The ID and OD of the part can then be inspected.  As with a head shot, the magnetic field is perpendicular to the current flow, wrapping around the test piece, so indications running axially down the length of the part can be found using this technique.